As a part of the Arctic Circle Assembly, the Breakout Session The Russian Arctic: Future Scenarios has held on October 11, 2019 in Reykjavik, Iceland.

The purpose of the panel was to bring together top policy makers and stakeholders of the Russian Arctic regions and representatives of science and expert community to discuss current and future socioeconomic complexity and transformation in the rapidly changing Russian Arctic.

In response to the ongoing environmental change in the Arctic, the panel speakers were sharing their visions on future developments in their regions (Murmansk Region, Sakha (Yakutia) Republic, Yamalo-Nenets and Chukotka Autonomous Regions), discussing existing and forthcoming plans and strategies.

The session was attended by:

Representatives of the academic community:

The Session was opened by Dr. Valery L. Mikheev, Rector of the RSHU, with a welcoming address to the honorary speakers, participants, and guests. During his speech, he emphasized that “the scale of climate change in the Arctic sets the Arctic community with new priorities related to preserving the fragile ecosystem of the Arctic, sustainable socio-economic and environmental development of the Circumpolar region, as well as preserving the unique cultures and traditional way of life of the indigenous peoples of the North.” In this regard, it is important and urgent to build scenarios and strategies for the future of the Russian Arctic that is half of the coastal strip of the entire Arctic region.

On behalf of the Yamalo-Nenets Autonomous Okrug, Deputy Governor Aleksander V. Mazharov made a joint presentation with the Deputy Director of the Arctic Research Station, Dr. Aleksandr A. Sokolov. They presented new promising scenarios for the development of the Yamal region, which are aimed at enhancing an effective cooperation between government, business, scientific community and local residents in order to achieve the sustainable development goals. The climate change can be tackled only through these collaborative efforts to preserve and restore fragile Arctic natural environment and biodiversity in the process of future regional/industrial development and natural resources exploration and production, as well as to support the traditional way of life of the indigenous peoples of Yamalo-Nenets Autonomous Okrug. 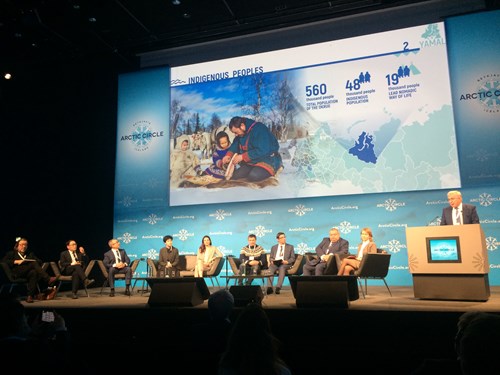 To this day, in the Yamalo-Nenets Autonomous Okrug, the regional government protects, retains, and maintains unique forms of the traditional way of life and subsistence economy.  The nomadic culture of the Nenets-reindeer herders, as well as such a form of social organization as the kin-based tribal communities of the Nenets, so-exist there with highly urbanized environment and heavily industrialized centers for gas production. In this regard, speaking about the future of the region, Alexander V. Mazharov emphasized the need to build an effective system of social elevators and upward mobility by ensuring equal starting opportunities in education and career-building for all youth in Yamal. In this important sphere, the role of the education and vocational training system, that equally provide and guarantee educational opportunities for all students, including indigenous youth, plays a key role.

The development of human and social capital was presented as the main drivers for a positive future scenario realization for Murmansk Region, which was presented by its acting Deputy Governor Maria V. Derunova. As part of the demographic policy, the regional government provides comprehensive public support programs aimed at creating the conditions for implementing a sustainable parental planning as well as providing socio-economic guarantees for both parents. Also, priority was given to programs to create comfortable living urban environments in harsh climatic conditions, as well as favorable working conditions and career opportunities and upward mobility-- both for local residents and visiting specialists—in order to implement future successful small and large-scale projects in the Murmansk region.

In her speech, Olga A. Safonova, Chairperson of the Nature Management and Environmental Protection Committee of Chukotka Autonomous Region Okrug, highlighted important segments of the region’s economic development based on the principles of ecosystem approach. Chukotka has tremendous economic potential and can play a significant role in the sphere of international and transboundary economic cooperation in the future, in development of (trans)Arctic shipping, as well as in the area of international scientific collaboration and cultural exchanges.

The strategy of socio-economic development of the Republic of Sakha (Yakutia) was presented by Mikhail A. Pogodaev, Deputy Minister for the Arctic Development and Indigenous Peoples Affairs in Yakutia. In his speech, he outlined serious challenges, mainly related to current and future climate changes. Among them is the destruction of the existing infrastructure – both in cities and rural settlements. Another serious obstacle to successful economic development and creating a comfortable living environment is largely underdeveloped road network, relatively low coverage of telecommunication services, especially in remote areas, and spatial fragmentation; inefficient systems for saving energy consumption and reducing CO2 emissions; small populations scattered over the wide areas of Yakutia.

The important tasks for future development for Yakutia for the period until 2035 include transport accessibility and developed means of telecommunication, transition to green energy/green economy,  industrial production based on innovative environmentally friendly technologies, comfortable and energy-efficient housing and social infrastructure, and modernization of traditional forms of the indigenous (subsistence) economy (reindeer herding, fishing, gathering, hunting, etc.). The achievement of these main tasks for Yakutia’s Strategy-2035 includes sustainable socio-economic development for comfortable living and high quality of life for the peoples living in the Arctic zone. It can be achieved by means of significant investment and infrastructure projects using high environmental standards and the best advanced technologies, strengthening interregional and international cooperation, the development of science and science-based technology.

In addition to the presentations by the representatives of the Russian Arctic regions, the session introduced  an overview of the Expert Report on the long-term scenarios “Russia’s Arctic Futures–2050” by Prof. Andrey N. Petrov, President of the International Arctic Social Sciences Association (IASSA) and Marya S. Rozanova, Professorial Lecturer at the George Washington University (GWU) and Advisor at the Russian State Hydrometeorological University (RSHU).  The report presented four overarching and twelve thematic scenarios of economic development, international cooperation, trans-Arctic shipping, human and social capital, and indigenous livelihoods in the context of expected environmental changes in the Russian Arctic.

In his address, Nikolai V. Korchunov, Ambassador at Large of the Russian Ministry of Foreign Affairs and a Senior Arctic Official responsible for international Arctic cooperation, emphasized the importance and significance of the Arctic as an integral part of the Russian history and identity as well as strategically significant region for the country. The main trends in Circumpolar region related to the Arctic development are largely supported in Russia, and strategies of the future of the Russia’s Arctic include the principles of sustainable development with the widespread introduction of energy-saving technologies, preservation of the fragile natural environment of the North, priority development of human and social capital, support of the culture and lifestyle of the indigenous peoples of the Russian Arctic. And very importantly, the strengthening of positive international cooperation and interaction in the Arctic region as a territory of peace and harmony. 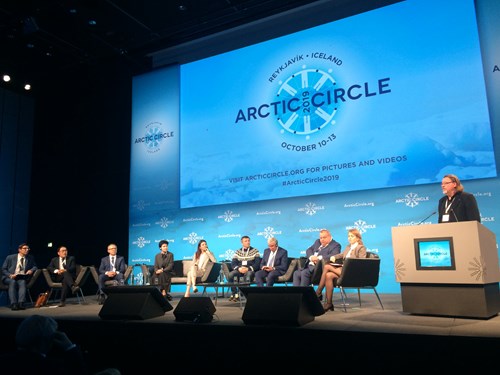 Summing up the work of the Session, Research Director of the University of Helsinki Prof. Lassi Heininen made a special emphasis on the need for closer cooperation, constructive and meaningful multilateral cooperation between all Arctic states. In Scandinavian countries, in the USA (Alaska), Canada, Iceland there is a well-established tradition of promoting a positive image of their countries and significant successful projects. At the same time, Russia’s Arctic regions have also gained vast experience in the field of scientific research of the Arctic zone, management of the northern territories, and implementation of strategic projects both in the regions represented at the Session and throughout the Russian Arctic. An important task in this regard is the more active participation of the Russian regions themselves in sharing their experience and revealing prospects and potential opportunities, on the one hand, and overcoming skeptical attitudes and the lack of a genuine and diverse interest in the Russian North that are currently prevailing in other Arctic countries, on the other.

It is on the basis of mutual interest, knowledge of the regional specifics and understanding of the logic of the development of diverse Arctic regions that makes it possible to establish long-lasting positive cooperation, strengthen multilateral ties in a large "Arctic family," and jointly solve future common global problems in the Arctic region.