The 51 participants of the MAC consisted of students from 13 different countries and 32 universities, as well as 5 Self-Identified Indigenous Participants (2 American, 1 Canadian, 1 Greenlandic, 1 Russian). They each represented a member state, permanent participants, working groups or observers. The MAC took course over 5 days, where the students took part in simulated council meetings.

Mikhail Sakharov from Northern Arctic Federal University attended the MAC for the first time. He was very impressed by the setting and by his colleagues, saying:

The MAC provided the students the opportunity to learn how the Arctic Council operates, by providing the participants the chance to debate on the current challenges of the Arctic Council, by simulating the 2nd Senior Arctic Officials (SAO) meeting.

The simulation was very disciplined, with each representative of each delegation speaking only when called upon, and within the scope of the topic on the agenda, the controlling chair kept a strict schedule, making sure that everyone was heard.

Wendy Villanueva Valenius from Nord University was very pleased with the event, saying:

“Coming here is a dream come true” ... “Feels real, it is taken seriously”

The participants also got an insight on how the Arctic Councils working group, Sustainable Development Working Group (SDWG) operate, and what challenges and opportunities they are faced with. Ekaterina Mikhaylova from the University of Sussex said:

Erika Vas from the University of Winnipeg, a first time attendant, was also very enthusiastic about the MAC:

“Encouraging, I can see the benefits” … “I would definitely do it again” 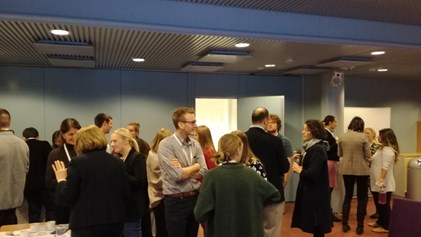 The consensus was that the MAC is a serious simulation, which is close to the real thing. For instance, the issue of the indigenous people not being involved enough, there was a growing voice in the council that the indigenous knowledge, experience and warnings were not being heard. Despite the fact that it was the indigenous peoples who started talking about the shift in the climate and the consequences many years ago, and tried to make the world aware.

During the week the students had the opportunity to experience Rovaniemi and what the city had to offer, one night was spend at the Kauppayhtiö, a local café and bar, where the students socialized, networked and got to create bonds and make friends outside the scheduled program.

The outcome of the MAC was the creation of the new working group, Working towards Arctic Visionary Energy Solutions (WAVES), whose mandate shall be to support collaborative research on, and to identify and develop best practices for Arctic-specific challenges in energy production, diversification, and technology.

The students also prepared a declaration for future thought:

The Permanent Participants would like to thank the Arctic Council for our collaborative work and look forward to our continuing prioritization of Indigenous perspectives. On the topic of oil and gas development in the Arctic, our lands and waters are greatly affected,  and our peoples' ways of life are experiencing great changes. By prioritizing the Permanent Participant Declaration in our Arctic Energy Horizon Agreement, we will see our rights to exist as Indigenous Peoples respected.

The MAC concluded by the participants receiving a certificate of participation as well as a UArctic gift.