The Thematic Network on Arctic Law and an international group of academics came together last Friday October 12 in London, to discuss and debate on the current state and future prospects of Arctic legal and political cooperation.

The venue, which took place in the Centre for International and European Affairs, was co-organized by Queen Mary University, University of Lapland’s Arctic Centre and University of Arctic’s Thematic Network on Arctic Law (TNAL). Amongst the key themes of the workshop were the current trends of the Arctic Council (AC) and the ongoing chairmanship of Finland as well as the rights and environmental agency of Indigenous peoples in the Arctic. 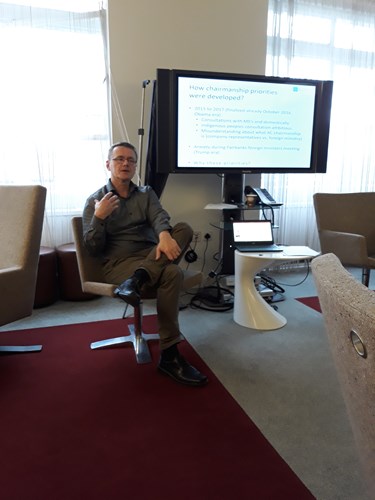 Director of Arctic Centre, the former chair of the TNAL, Professor Timo Koivurova gave an assessment of Finland’s AC Chairmanship with many insights into the successes and challenges of Finland to carry out its tasks as a chair.  Finland assumed the Chairmanship from the United States on May 11, 2017. As pointed out by Koivurova, compared to the previous Chairmanship of Finland from 2000-2002, the current task is more challenging than earlier one due to the fact that AC has expanded and become a more complex and ambitious inter-governmental forum. Koivurova elaborated the main cross-cutting priorities for the Finnish Chairmanship Program: combatting climate change and advancing UN sustainable development goals (SDGs). The individual Finnish priorities for its leadership period focus on connectivity, education, meteorology, and environmental protection.

From the perspective of UArctic, Finland’s role in advancing the education is perhaps the most important achievement of the Chairmanship. Together with the UArctic, the Chair’s aim has been to create a network of educators, with a goal of developing new methods (such as how to use the potential of digitization for education in the Arctic) and best practices to assist Arctic teachers at early-childhood, primary and lower secondary education.

One very prominent project, under the Sustainable Development Working Group (SDWG), which helps advance the educational goals of Finland’s Chairmanship Program is the “Teacher Education for Diversity and Equality in the Arctic” with the goal to develop teacher education as means to promote teachers to become creators of sustainable future in the Arctic.

According to Koivurova, one of the major successes of Finland’s Chairmanship has been an exceptionally open dialogue and ambitious consultation process of relevant actors. Indigenous peoples’ organizations as permanent participants to AC has been widely consulted and their acceptance and input have been incorporated into the priority areas and programs. This is very important taking the formal position of Indigenous peoples’ organizations in the AC.

Heinämäki concludes by stating that most successful stories of Indigenous peoples relate to projects where Indigenous communities have decided to act on their own, independently on state’s recognition or support, to protect their environments against harmful changes.

One such example is the project Snowchange, which is carried out by Skolt Sámi in Finland. Relying on traditional knowledge of the local Skolt Sámi, the project participants have managed to restore the damaged parts of the Näätämö watershed with the positive outcome of returning fish and bird life. Allowing Indigenous peoples to act as stewards of their environments rather than seen them as victims of environmental degradation would be the next and urgent step in environmental decision-making both in global as well as in local contexts.