Gargia-Oktemtsy-2015 Conference on Sustainable Development of the Northern Territories

From June 11 to 13, 2015, Oktemtsy village of Khangalassky region of Sakha Republic, Yakutia, Russia, held the second Gargia-Oktemtsy-2015 conference with the title “Sustainable Development of the Northern Territories: small production technology as the basis for the development of tourism infrastructure."

The conference was organized by the “Local and Regional Development of the North” the University of Arctic thematic network (the leader of the network: Oksana Romanova, North-Eastern Federal University, Yakutsk, Russia) with the help of the “Khangalassky Region” and “Oktemsky nasleg” municipalities’ administrations. The aim of the conference was to develop an infrastructure for tourism in villages as a new source of development of rural municipalities. 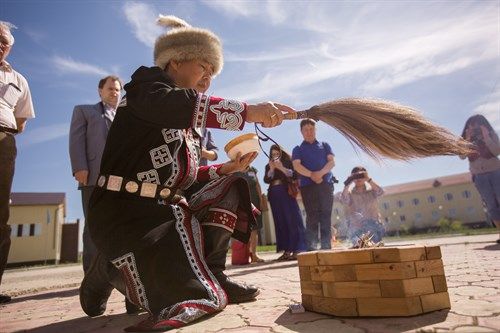 The first day consisted of plenary assembly and presentations. The assembly was opened with greetings from NEFU provost M. Prisyazhniy and head of the Khangalassky region “Oktemsky nasleg” municipality A. Bolshakov.

On the second day of the conference the participants have worked in groups in order to create a “road map” for development of tourism in the rural municipalities and creation of new touristic products.

The second group visited Elanka tourist complex, which is currently abandoned. The participants explored the place and researched its perspectives for future development. The group has proposed several ways of making the village a new tourist destination due to its natural beauties, short distances to other destinations like the Lena River Pillars, the Yakutia’s heritage, the Diring Yuryerkh excavation sites with the cave drawings left by the first settlers, and yamshchik station museum with old equipment of the first pathfinders in the republic.

Both groups presented their works and projects on the third day of the conference, and proposed a plan for rural tourism infrastructure development on the basis of international, national, and regional partnerships.

With the help of the International Gargia-Oktemtsy-2015 Conference, the conference participants and people from the local municipality have earned important experiences, created new useful connections, and made new partnerships.

Throughout three days of working, the conference has gathered 61 participants.

At the end of the conference, the next theme and main topics of Gargia-Oktemtsy-2016 were discussed on the thematic network round table.