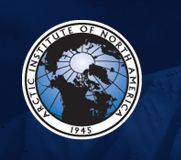 A non-profit membership organization and multidisciplinary research institute of the University of Calgary, AINA's mandate is to advance the study of the North American and circumpolar Arctic through the natural
and social sciences, as well as the arts and humanities, and to acquire, preserve, and disseminate information on physical, environmental, and social conditions in the North. Created as a bi-national corporation in 1945, the Institute's United States Corporation is housed at the University of Alaska Fairbanks.

For information on becoming an AINA member and receiving the journal, please visit the Institute's website at: http://www.arctic.ucalgary.ca/.

The following papers appear in the December 2008 issue of ARCTIC:

"Historical Evidence and the Eastern Greenland Case"
By: Janice Cavell

The issue also contains six book reviews, an obituary for Leslie A. Viereck, and InfoNorth essays by the recipients of the 2008 Jennifer Robinson and Lorraine Allison Scholarships, administered by the Arctic
Institute of North America.
﻿
Tags: events and opportunitiesnews