During the winter and spring of 2007, the readers of the online version of the Finnmark Dagblad were in for a treat; they could follow the daily life of a student from their community as she discovered the American Arctic in .
Hilde Porsanger, a second-year Media student at Finnmark University College in Alta, Norway, left in January for a north2north exchange to the University of Alaska Fairbanks, where she would further her knowledge in the field of journalism. Before she left, the Finnmark Dagblad approached her about writing a blog on her experience in Alaskan soil, in which she could share her thoughts, post pictures, and keep in contact with members of her community. “Writing my blog helps me to keep the memories of what I’m doing alive. It also helps me to clear my head, it’s a kind of therapy,” she explains. 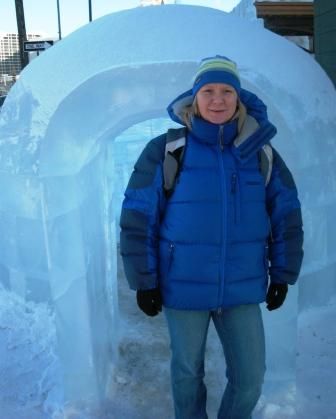 For the 33 year-old, the decision to take part in the UArctic north2north program came from a question jokingly asked by one of her teachers on a stormy winter night, as she was sitting in class editing a video documentary. “He asked if any of us would want to go to for a semester,” she says. “I just looked at him and asked if he didn’t think we had enough of winter at home…But then I thought about it, and here I am!”
UArctic’s north2north program is a student exchange program which allows students to experience living and studying in different UArctic member institutions around the world. The program exposes students to different northern regions and peoples.
For Porsanger, going to meant in fact going South: her hometown of Tana – close to the Finnish border – is located above the Arctic Circle, whereas is below. However, it was the similarities between the two towns that the student noticed the most. “People in have the same economical problems as they have back home. Everything is more expensive up North than it is down South. But Northerners are tough, they had to find their own way to survive far away from everything,” she explains.

She also found Norwegians and Alaskans had similar taste in outdoor activities, and was able to practice her cross-country and downhill skiing skills, as well as go on snowshoeing trips. “The wilderness, that’s the main reason for why I went to ; I’m an outdoor girl,” she says. Dog-mushing is also a passion shared by the two regions, and Porsanger participated in both the Yukon Quest and the Iditarod (two of the world’s hardest dogsled races) as a reporter, writing news for Norwegian newspapers about local participants and filming the action for a documentary.